“There have been several times in my life, when I prayed as though my life depended on it. This was one of them”.  When Paul Michaels set out on his journey to eastern Nepal to spread the Gospel, he did not realize how dangerous and harrowing his long journey would be.  As Paul writes:

I was very excited for our fall 2015 trip to Nepal.  This would be our first initiative with Nepali pastors in the east to bring the good news of Jesus Christ to villages that had never heard this news before.  A little over a dozen men and women representing six different VDC gathered at a church on top of the mountain (Nepali church leaders seem to take Christ’s words quite literally that we are to be a light like a city on a hill. This has caused me no little pain trekking to their churches).

Many brothers back in K——–, upon hearing that I was going east, asked, “Is it safe to go there now?”  After a fourth brother questioned my plans I began to wonder the wisdom of them, myself.

Many violent protests had been going on since August when the Constitutional Committee published the articles of the proposed Constitution.  Supposedly, because of the response, India had also closed its borders into Nepal. Over forty men, women, and even children along with policemen had been killed as three ethnic groups protested. These groups also wanted autonomy for their territories which India also supported.

I prayed about these unfolding events, and still had a peace and a conviction that we should go ahead. So we set off on our east-bound journey.  We boarded our bus on Saturday afternoon around 4pm. 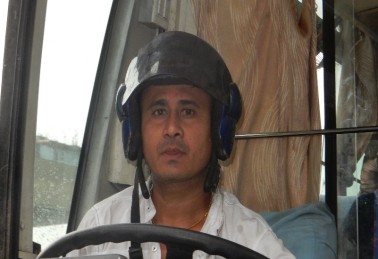 Day travel through the Plains (called the Terai region) was completely forbidden because of the violent protests, but night travel was allowed, thinking that most of the protestors would sleep. So commercial trucks and buses would only drive through the night. All cars or motorcycles were forbidden day or night.

The first five hours from K——– were quiet, but then we arrived in the heart of the Plains.  At this point, the authorities stopped all the trucks and buses heading east.  We waited for two hours to let any traffic heading west to filter through.

Then they formed all of us into two lines to drive side by side on the two lane road.  A convey stretching for miles quickly formed.  Then we were released.  It was around 11pm.  Again, for the first hour things were quiet as we drove like two long strings of ants marching east.

Everyone was on edge.  We were commanded to keep quiet and to close all the windows on the bus (something I did reluctantly because it was still over 80 degrees outside and there was no air conditioning on the bus).  As our bus inched ahead of a commercial truck I could see that they had welded steel grills over the side windows, while the drivers wore motorcycle helmets for protection.  A rock might injure but at least not kill.

Then suddenly, all hell broke loose and our bus stopped!  I was awakened from dozing in and out to see that a truck ahead of us pulled to the side of the road because it had been firebombed!

Everyone began to shout at each other to turn around, and bus attendants ran up the road to do who knows what?  The drivers began turning their mammoth vehicles around on our narrow two-lane road. It was like a herd of elephants packed together, trying to turn around. It took our bus ten minutes to finally get turned.

But just as we maneuvered around, a pack of special-forces police drove up on motorcycles shouting, “Stop turning around. We are here to protect you and to lead you through!” Each motorcycle had two men, the one on the back resting a shotgun on his hip. We sat, the police continued to shout at us, then our driver and the others decided to turn back around

Again the convoy began heading east, more cautiously this time, only going about twenty miles per hour. We were escorted to the next village. Then the police peeled off and joined the rest of their troop. Some trucks and buses ahead of us also peeled off, figuring if the police weren’t going to escort us, they weren’t going to take the chance. But our driver forged ahead. I got a sick feeling as we drove out of the village into the darkness, realizing we were now leading the convoy with no police escort. There have been several times in my life, when I prayed as though my life depended on it. This was one of them.

It was now about 1am. Then, it happened again. Another attack!  I could hear glass shatter and the bus immediately behind us had its windshield broken out.  Strangely, though we were the lead vehicle no rocks hit us.  We forged ahead until we felt we were out of firing range, then stopped the convoy. 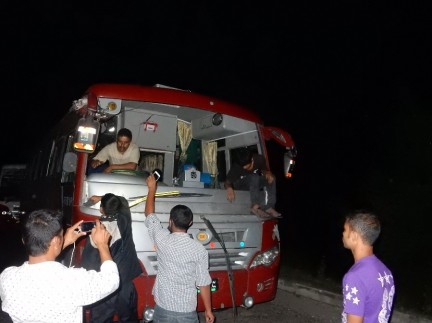 It was time for a little cleanup.  We waited until the whole windshield was pushed out and shards of glass were thoroughly cleared off the dashboard.  Obviously, these drivers had done this before.  Once the glass was swept to the side of the road, we started out, again. No police escort though. We just kept going as though we were at a point of no return. I looked down and every twenty feet for at least two miles had piles of shattered glass lining the side of the road.

I kept praying, but I am not sure how long. Eventually, fatigue had overtaken me and I next woke up around 5 am in southeastern Nepal.  I asked Daniel, my friend and translator, “Is it safe now?” and he said, “Yes, it is safe.  Somehow though, you slept through two more attacks.”

Again, nothing had touched us.  The morning sun never looked so glorious!

Thanksgiving filled my heart as I thought about how the Lord had been our fortress and shield. I was reminded of the Lord’s promise: “Go therefore and make disciples of all nations…and behold, I am with you always even to the end of the age.” The promise of Christ’s presence became very real for me that day, and our experience chased away my fears and flooded my heart with courage to go into the unknown of taking the good news of  Jesus Christ into the Hindu villages of eastern Nepal.